“So here I stand before you preaching organic architecture: declaring organic architecture to be the modern ideal and the teaching so much needed if we are to see the whole of life, and to now serve the whole of life, holding no tradition essential to the great TRADITION. Nor cherishing any preconceived form fixing upon us either past, present, or future, but instead exalting the simple laws of common sense or of super-sense if you prefer determining form by way of the nature of materials.” Frank Lloyd Wright, An Organic Architecture, 19391 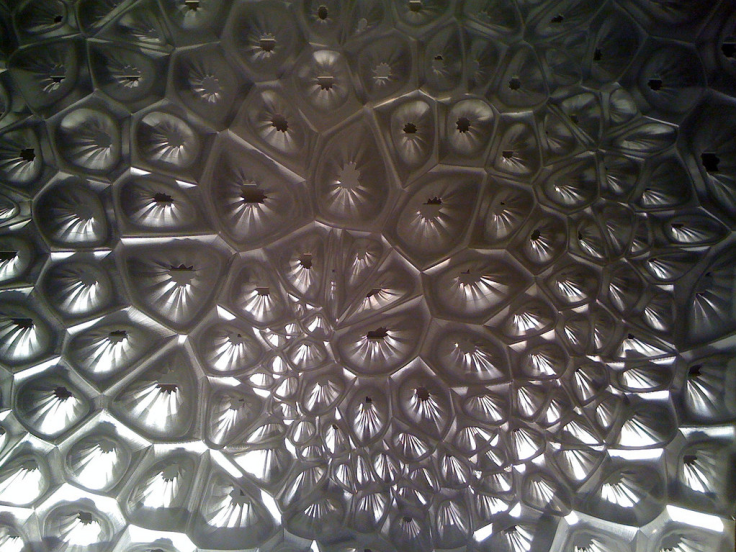 The motivating query of this course, to paraphrase/elaborate slightly upon the syllabus, is: How can our contemporary digital design tools “support the tectonic quality of timber buildings”1 In seeking to understand the meaning of the term, tectonic, one can simply look to the readings: the article, “The tectonics of timber architecture in the digital age”, by Hani Buri and Yves Weinand, conceives of tectonics as “construction technology’s potential for poetic expression.”2 These are not particularly constraining terms, and as such they are fairly unbounded. The form of those tectonics, and of that poetic expression, instead witnesses differentiation and specification upon a linear, historical path. The authors lead through the post-and-beam days of the skilled carpenter all the way up to our present technologies, whereby the article inflects contemporary facility with the claim that “the hallmark of the digital age is a strong tendency towards individualization.”3 What they’re referring to here is the production of individualized members within complex, digitally borne, artifacts. Manufacturing expense is no longer hampered by the creation of endlessly varied shapes; the transfer of data to tool is nearly seamless (and probably cordless).

For the designer and engineer, digital tools are similarly unburdened from the delirious tedium of configuring the shape and size of members within a complex building environment. But while these programs certainly curtail, substantially curtail, the time required for adequate calculation of stresses upon proposed structural configurations (and computers have been an invaluable aid to engineers in this capacity for decades), their real value may not be merely in testing pre-designed geometries, but in generating new forms based on environmental and structural conditions. Consider the Arena Stage project in Washington, DC, by Bing Thom Architects. This project was notable for being one of the first in the capitol to employ West Coast–style heavy timber wood techniques. The building uses 18 PSL columns along the perimeter of the structure to hold up the steel roof, as well as brace for the wind loads, which are directed by 324 wood muntins and 216 wood support arms from the steel cable-hung glass panels back towards the columns they enclose.  The 18 columns’ cross section sizing “was governed by deflection under wind loading.”4 However, even though the tributary area delivers a reduced load to certain columns, “all columns were sized identically for visual consistency.”5 If a builder will use parametric tools to enhance the quality of a building, including its sustainability-governed use of materials, those tools should ideally be permitted into more facets of the design process. In this case, using the modeled tributary structural data, the columns could have been individually sized to fit. The argument of past generations in favor of standardizing production for cost-effectiveness no longer holds. Mass-customization could have potentially benefited both the fiscal trajectory and the material trajectory of this project, and doing so would have engaged more fully the benefits of parametric modelling.

Neri Oxman, a professor at MIT’s Media Lab, currently leading their Mediated Matter group, wrote what amounts to a manifesto for her research in the subject of what she calls new materiality. Entitled “Per Formative: Toward a Post-Formal Paradigm in Architecture,” the article posits that in looking to nature for organic form and harmonious design, Modern and Post-Modern architects have merely adapted the qualities of natural form into a pre-existing formal architectural discourse. In her view, “when the conception of nature is extended to include its literal attributions – as well as the very materials it is made of – one may approach an alternative paradigm of design, as opposed to its visual language…materiality a priori rather than a posteriori.”6

What this seems to mean in practice is that the performance of a given material, in our case wood, can be analyzed and configured through parametric tools so that the material in question is allocated precisely to need. “Design based upon material performance seeks to promote an approach whereby matter is distributed where needed in order to respond to its structural, environmental, or social performance.”7

There’s something truly refreshing about reading a good ol’ manifesto: the distillation of language, the precision of the text. So, if patience allows I’ll go ahead and tee up one more quote of Oxman’s before I move on to applications. So, here…near the end of the paper, which was published in Yale’s Perspecta in 2010, she makes a clear distinction between her freshly minted new materiality and what she coins both parametricism and new vorticism, and in order to give that distinction meaning she unleashes what I read as a powerful raison d’être for the entire piece:

“This is to be read as an epilogue to that long historic chapter of modernist formalism, a phenomenon of architectural culture still proliferating today under the seductive visual power of digital prowess. This sustained vector of the tradition of the new with its protean renewability is a moving target, difficult to transcend, hard to replace as a modus operandi for the production of spectacle.”8

Making natural form while simultaneously shaking off all formalist properties, in a design setting, while using contemporary digital tools, seems to equate precisely with a generation of form through evolution. Evolution being Nature’s original, quite effective (G__ save the platypus), generative device.

In this class, and with the tools we’ve been given (Rhino, Grasshopper, Karamba), we can calculate a form based on environmental/material parameters. We can then test the structural integrity of that form based on the environmental/material parameters. With due consideration for new materiality, it seems to be possible now, and maybe even desirable, to figure these calculations recursively. Instead of seeking a generative algorithm for structural creation, and then outputting that geometric form for structural analysis, and then forwarding that on to construction, the process could first loop back from structural analysis to the generative algorithm, and it could then continue to loop and loop and loop and loop, until a more precise quality of tectonics emerges. A structure could therefore evolve, using only material properties and programmatic requirements to dictate its final form. Iteration after iteration, the program would seek the ideal.

Before I go further it should be noted that I suspect that the ideal may be ugly. Ugly in the sense of “fit.” Does this thing fit in? Is it any comfort to be around? Which is of course the downside of this type of parametric synthesis. It is precisely because it drops all formal pretense and precedent that this method and these creations could be quite out of place, really far-out, jarring little monsters. But sustainability may need preclude our romantic attachments to outdated forms. And I’m not sure yet, not positive at all, that beauty couldn’t come out of this arrangement somehow.

So. Tools. For exploring Recursion:

Built into Grasshopper, this device will run through a set of sliders and iterate ad infinitum in a user-specified quest to minimize or maximize a certain predefined number.

It creates loops. I can’t really say much more yet because a.) I’d like to figure out if Karamba can even talk to these tools first and b.) there are so many youtube videos that would really do more better justice to the explanation than I should ever could, it’s silly.

Neri Oxman’s work is here. And a link to her TED talk, “Design at the Intersection of Technology and Biology” is….here.

“I Love Neri Oxman’s Work” by Gilad Lotan is licensed under CC BY 2.0

One thought on “The Nature of Form”

This is a blog for the first collaborative course between Oregon State University’s Wood Science and Engineering and University of Oregon’s Architecture departments, lead by Profs. Mariapaola Riggio and Nancy Cheng. The course focuses on the three main factors of building tectonics: the material, the tools and the design. It explores how timber may be custom engineered to open up new technical and design possibilities. Students study classic timber structural systems and examine how they are being transformed by digital techniques.